On 16th May 2019, the UK government (AKA “Nanny”) passed into law the Offensive Weapons Act 2019, which included a ban on the sale and transfer of MARS (Manually-Actuated Release System) & LR (Lever-Release) firearms. Current owners were allowed to keep theirs until Nanny could arrange compensation. More information on this here:-

Many of these MARS & LR firearms were used by disabled and physically impaired target shooters, allowing them to compete in UK rifle competitions they otherwise would not have been able to since prior to the 1988 firearm act (the act that banned among other things, self-loading centrefire rifles). MARS & LR firearms are comparable to motor vehicles that have been adapted for disabled use. Here is an arthritis sufferer’s demonstration of how his Lever Release 9mm rifle helps him overcome his disability and continue to compete:-

This ban was not based on any previous criminal use of MARS/LR rifles, because there was ZERO criminal use (just like the .50 cal rifles that were originally part of this act, that was later dropped from it). The UK’s latest set of draconian firearms laws were based on what *might* happen if a criminal/terrorist got hold of one (forgetting the fact that criminals and terrorists can already access a wide array of sophisticated and illegal firearms). It was basically ‘pre-crime.’ Stop and think about that for five seconds. It is akin to jailing a person because you think they *might* be a criminal at some point in the future, yet providing no evidence, not even hearsay, that the person will commit a crime. If that isn’t a sign of a totalitarian state, I don’t know what is!

In common with many of the UK’s previous firearms acts that were passed under the ruse of maintaining public safety, the MARS/LR ban has now been proven to have brought about ZERO reduction in violent crime, gun crime or homicides. The owners were allowed to keep them until compensation could be arranged and the firearms surrendered/seized.

NINE MONTHS later we are still waiting. To my knowledge NOT ONE has been used in a crime since the ban. Nanny claimed she was banning them because they were rapid firing, which was a bare-faced lie. They are comparable in rate of fire to straight-pull rifles, and certainly nowhere near the speed of a double-action long-barrel revolver (UK legal). Below is written evidence submitted in opposition to the bill by Mr. Gian A. Ameri. It directly contradicts Nanny’s claim that a MARS rifle has a rate of fire approaching that of a self-loading rifle (and she didn’t provide any proper evidence of that either!).

If the MARS/LR ban was genuinely about public safety, Nanny would not have let the general public have access to these “especially dangerous” and “rapid-firing” firearms. Nanny would have sent the police around to seize them immediately, certainly not nine months later (and counting). Have a think about that. Nanny has, by her inactions, proved these firearms represent an insignificant threat to public safety. That old saying “gun control isn’t about guns, it’s about control” rings true with this one.

There are many other items the general public currently have access to which represent a far greater threat to public safety. For example, in Nice, France in 2016, a terrorist acquired a 19-tonne lorry and killed 86 people. There are also firearms legally available in the UK with much higher rates of fire than MARS & LR rifles, such as double-action revolvers, revolver rifles and section 1 shotguns. All of these can be chambered in cartridges with the same if not higher muzzle energies than MARS & LR rifles. We must also not forget the never-ending supply of illegal firearms some of the 4,600+ NCA designated Organised Crime Groups have access to. It seems like not more than a day passes before we hear of yet another UK shooting that will more than likely involve a handgun. Didn’t Nanny confiscate these in 1997 to reduce gun crime?

Did Nanny take any real action against the issues mentioned in the previous paragraph? No, of course not, because she favours the ‘easy targets’ in order to seen to be ‘doing something’ and to uphold her “façade of public safety” (i.e. so that people ‘feel’ safer, when in reality they aren’t). In this instance, the easy targets were the minority group of MARS & LR owners including many disabled people. They were

discriminated against not through any fault of their own, but because Nanny wanted to confiscate their toys.

All of this comes with a significant cost to us UK taxpayers. The loss in business revenue is estimated to be £4 million a year for the first 10 years. Compensation to current owners is likely to be around £6 million (one supplier alone held at the time of the acts passing around £4 million worth of rifles and components). If Nanny was really concerned about reducing the criminal use of firearms in the UK, surely this money would be better put towards tackling the 4,600+ NCA designated OCG’s, many of whom are already heavily armed. This is where almost all of the gun crime is coming from, not the FAC/SGC holders. Here is the Home Office’s own Impact Assessment report on what it will cost the country, bearing in mind these figures may be an underestimate:-

In continuation with my ‘Loud ‘N Proud,’ no-compromise, hardline stance towards our UK gun rights, I will raise the above issues with the government directly, and politely request them to completely remove both MARS & LR firearms from the act, citing the above reasons. I will draft a personalised email to my own MP, as well as a generic “Dear Sir/Madam” version of the same email to all UK MP’s as well as other relevant bodies such as the Home Office etc. It is high time for the UK shooting community to show the government that we too have a voice.

I call on all UK firearms & shotgun owners, and anyone else who believes in civil liberties, that seeks to halt the UK governments ceaseless and unnecessary infringements on our rights. Please email/write to your MP and ask that the MARS & LR ban be removed completely. Perhaps start by congratulating them on their re-election. Feel free to touch upon the subjects I have mentioned above, but please do so in your own words. Let them know the shooting community has a voice and our growing minority group demands the same protection other minority groups have. That is in addition to the protection needed for our many disabled shooters. Be firm but keep it polite and civil. You can use this online service to find and email your MP using your postcode:-

In addition, you can also email all 650 UK MP’s with a generic “Dear Sir/Madam” version of your email, as well as other relevant bodies such as the Home Office etc. You may need to split the emails into smaller batches if you get a spam warning when using “BCC.” Below is a link to an Excel file containing a list of email addresses. Some will read it, some will ignore it, some will ask you to email your own MP, but you will have got the attention of most of them. It is important we “stir the pot” and spread this message far and wide and get everyone discussing it. 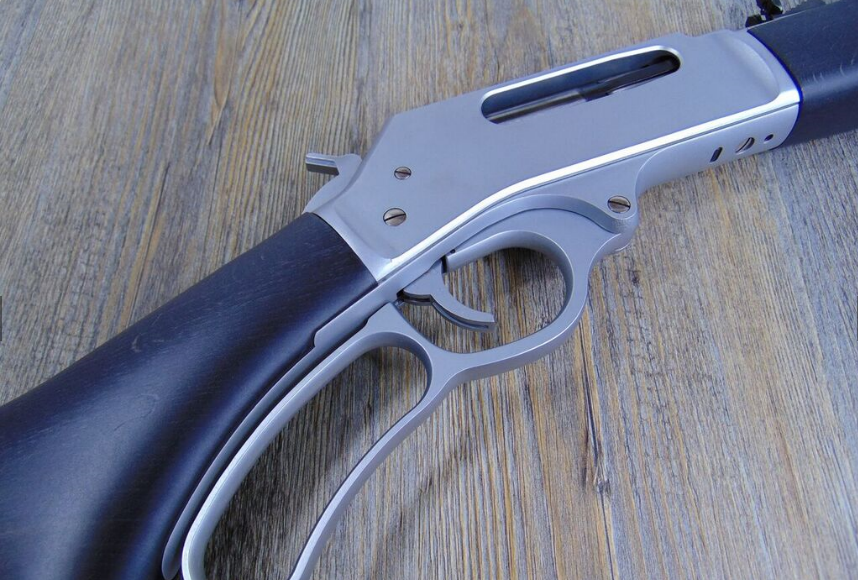 If you have a problem with Dino’s then this is the rifle for you! A bit pricey on ammo though! Range Time with the Henry…